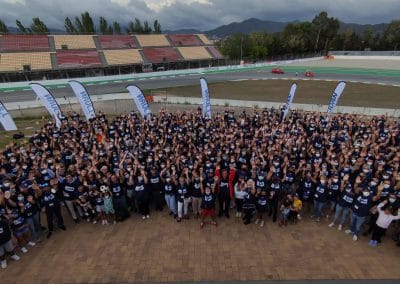 MONTMELÓ, Spain – J. Juan brought in 560 employees to the Privilege de Montmeló, not far from Barcelona, ​​as part of the 55e-birthday celebration, which had been postponed due to the Covid crisis.

J. Juan invited all its employees to the Privilege area of ​​the Circuit de Catalunya to enjoy a day of Superbikes, becoming the first company to organize an event on a motorcycle circuit since the start of Covid.

About 600 people were invited to a specific macro bubble, where all necessary measures had been taken to avoid contagion. All participants presented COVID passports or had passed a preventive check 24 hours before the event.

J.Juan has outfitted the Kawasaki Racing Team with braking systems and components for the past eight years and has won a total of seven world championships during that time, one with Tom Sikes and six with Jonathan Rea.

During the event, Jonathan Rea and Alex Lowes presented plaques in tribute to Mr. Angeles, Carlos and José Luis Juan, executives of J. Juan who, for 40 years, have been the architects of a great motorcycle industry. Spanish.

J.Juan is a world leader in mesh hydraulic tubes for motorcycles and is the second largest European brake system factory in Europe. It invoices more than 70 million euros and employs 640 people around the world. It has just signed a sales agreement with Brembo, the world leader in braking systems, which will strengthen its presence in the two-wheeler market.